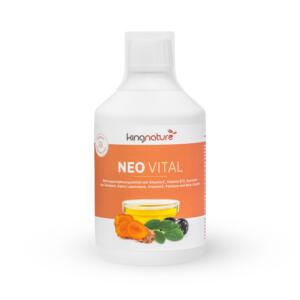 Vitamin B12 belongs to the group of B vitamins. It is water-soluble, with the trace element cobalt as its central atom. Vitamin B12 fulfills a variety of functions in the human body, especially important metabolic mechanisms. Since the vitamin can be formed exclusively by microorganisms, it is one of the vitamins most frequently supplemented. Particularly in a vegetarian or vegan diet, people regularly look for an additional source of vitamin B12. What exactly vitamin B12 is and how it can be used, in the following!

What is vitamin B12?

Vitamin B12 belongs to the chemical compounds of cobalamins and is also known by the technical term adenosylcobalamin. Vitamin B12 is produced in nature by microorganisms, primarily bacteria. They enter into symbiotic relationships in the digestive tract of animals as well as on the surface of plants and produce the corresponding vitamin there. In the human body, vitamin B12 is mainly assembled by the liver and kidney. The main sources of human intake are animal products, such as beef liver, cheese, fish and eggs. Smaller amounts can be found in some algae and in soy products such as tempeh and soy sauce. Small amounts of vitamin B12 can also be found in vegetables preserved by lactic acid bacteria. The same is true for zingiberales, which are ginger and ginger plants. Since the amounts are much smaller than those found in animal products, the additional intake of dietary supplements containing vitamin B12 is recommended, especially in a purely plant-based diet. The body can store the vitamin well in the liver and muscles, which is why even in the case of a temporary undersupply, the stores can often compensate for two to four years. An undersupply therefore often only becomes noticeable after a few years.

Vitamin B12 and its effect in the body

Vitamin B12 fulfills a variety of functions in the human body. Among the most important are various metabolic processes. Vitamin B12 is essential for nucleic acid synthesis, myelin formation, cell division and hematopoiesis (the formation of blood). This makes vitamin B12 one of the most important nutrients for the body. Requirements may increase as a result of pregnancy. Newborns and infants also need more vitamin B12 than the average adult. Diseases such as leukemia and chronic infectious diseases also require an additional supply.
The body can normally absorb vitamin B12 well in a balanced diet. Problems can occur with so-called malabsorption or genetic disease. Certain toxins and medications can also inhibit absorption. Those who supplement vitamin B12 should therefore not take the tablets or creams at the same time as medication, but rather at a later time. Age and alcoholism are also among the risk factors of vitamin B12 deficiency. Vitamin B12 is supplemented primarily when a deficiency is detected or to accompany a vegan diet. In some cases, tablets or creams containing vitamin B12 are also recommended for general malaise, psoriasis or in combination with certain amino acids to relieve fatigue and nervous tension.