L-methionine is involved in various bodily functions. Among other things, it contributes to the formation of hormones, neurotransmitters or nucleic acids. L-methionine is a precursor of the amino acids taurine and cysteine and of the body’s own antioxidant glutathione. Furthermore, the amino acid supports the regeneration of the liver and kidneys. L-methionine has an antioxidant effect and can accelerate the breakdown of toxins. 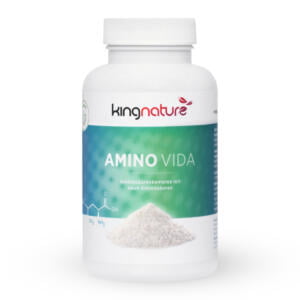 Amino acid complex with all 8 essential amino acids plus L-Arginine. 240 tablets with 500…

The amino acid L-methionine and its functions in the organism

L-methionine is an amino acids. also known by the chemical name α-amino-γ-methylthiobutyric acid.
This sulfur-containing amino acid cannot be produced by the body and must therefore be supplied to it regularly with food. It is the precursor for other essential substances such as cysteine, which plays an important role in the formation of glutathione. The sulfur itself (except in cysteine), which is contained only in the amino acid L-methionine, is also indispensable for numerous processes within the body. Above all, however, methionine is involved in the synthesis of a number of proteins and hormones, for example in the formation of carnitine, but also the sleep hormone melatonin and the stress hormone adrenaline. In the formation of proteins, L-methionine is a kind of primordial amino acid, since it functions, so to speak, as the first basic structure of every protein.

Amino acids, especially L-methionine, are primarily needed as basic elements for protein synthesis.
Proteins are the body proteins that make up a full 20% of the human organism. They are responsible for numerous functions and are part of muscles, organs, skin and other body tissues. To form proteins, the different amino acids – depending on the genetic information – combine to form chains of different lengths. The 20 amino acids, of which L-methionine forms the basis, are also known as “canonical amino acids” or “standard amino acids”.
Depending on individual needs, the human body of an adult requires about 2-3 grams of L-methionine ingested with food. A rule of thumb states:
21 grams of L-methionine/kg body weight daily should be consumed by an adult.

When the need for L-methionine is increased

In some individuals, the need for L-methionine or amino acids in general may be increased, at least temporarily. Under some conditions there is an increased consumption of these and other amino acids, which should then be supplied to the body in larger quantities. This can be the case in particular with an existing allergy, autoimmune diseases that make the absorption and utilization of individual nutrients difficult, liver diseases and urinary tract infections. However, healthy people can also have an increased need for L-methionine. For example, athletes, vegans and vegetarians, people who work hard physically, and people who follow a dietary regimen also have an increased need for amino acids such as L-methionine.
Any excess of L-methionine is broken down or converted into its components and then excreted via the intestines and urinary bladder. Within the process of conversion and degradation, sulfuric acid is formed, resulting in beneficial acidification of the urine.

This essential amino acid is found in both plant foods and foods of animal origin. However, the water-soluble methionine can be easily washed out if it is overcooked or soaked for an excessively long time and the soaking water is poured away. Hot temperatures during frying also affect the amino acid and destroy its basic structure. Sufficient supply of L-methionine is therefore not always guaranteed despite the consumption of appropriate foods.
The following foods contain appreciable amounts of the amino acid L-methionine:
In today’s often stressful times, it is not always easy to consume enough food with valuable amino acids such as L-methionine on a daily basis. Especially people who prefer to get their amino acids from plant-based foods would have to eat legumes daily to be fully supplied with amino acids. This challenge is not only known to people who live vegan or vegetarian. But they are often very health-conscious and want to prevent a lack of essential nutrients. With the amino acid complex “Amino Vida”, a high-quality product is available to all those who want to additionally supply themselves with L-methionine and other essential amino acids. This is 100% vegan, as it is obtained from vegetable components such as legumes. Here is the amino acid in combination with 7 other amino acids, which must also be supplied with food.  In addition, the optimally composed amino acid complex contains the partly also essential amino acid L-arginine, which is here – like the L-methionine and the other amino acids – in hydrolyzed form.
If you want to do without the amino acid L-tryptophan contained in it, the product “Amino Eight” is an identical product without tryptophan – but with an increased proportion of the other amino acids.

If you suspect an increased need for L-methionine and/or other essential amino acids, you can use high-quality supplements such as “Amino Eight” or “Amino Vida” to meet your needs. With these, not only vegans and vegetarians are optimally supplied with the most important amino acids, but everyone who shows an increased consumption or need.